CRA – How Your SR&ED Claim Is Processed

In early 2012, the Taxpayers’ Ombudsman published a document about an investigation into whether Canada Revenue Agency (CRA) was correctly administering the Scientific Research and Experimental Development (SR&ED) program. That report was commissioned by the federal government after several industry associations complaints about inconsistent treatment of SR&ED claims. They argue that similar claims were treated differently. Then during the last conference of the APFF (Fiscal and Financial Planning Association), I took the opportunity to some information, which I am pleased to share with you.

It seems important to cover the treatment of SR&ED claims in its entirety to further explore and understand the issues at hand.

As a first step, the file is sent to the tax centre assigned to the applicant’s region. After approximately 15 days, the company will know whether its request is approved as filed. In this case, the claim is then assessed and a Notice of Assessment is sent to you.

Otherwise, the file will be forwarded to a tax services office (TSO) for further review. At this stage, the review is preliminary, and the criteria are not disclosed to the applicant. Following this preliminary review, the TSO will send a letter to the company indicating that the SR&ED claim was accepted as is, without further review.

If the claim is still not accepted, the file will be transferred to a research and technology advisor (RTA). Again, your claim can be accepted as filed without any further review. However, the RTA may select your claim for a desk review or a more detailed technical and/or financial review. It should be noted that the decision can be different for each project included in the same claim.

It is important to mention that review criteria are not the same since they depend rather on the issues and specific contexts of each case. The RTA will focus on the technological uncertainties, the assumptions, iterations included in claims, but especially the knowledge base associated with it. It is here that non-uniform processing are done with similar applications. The complete review process through to the final stage would take approximately 120 days (to which we add 15 days for the tax centre).

Here’s a table showing the different stages of how a claim is processed. 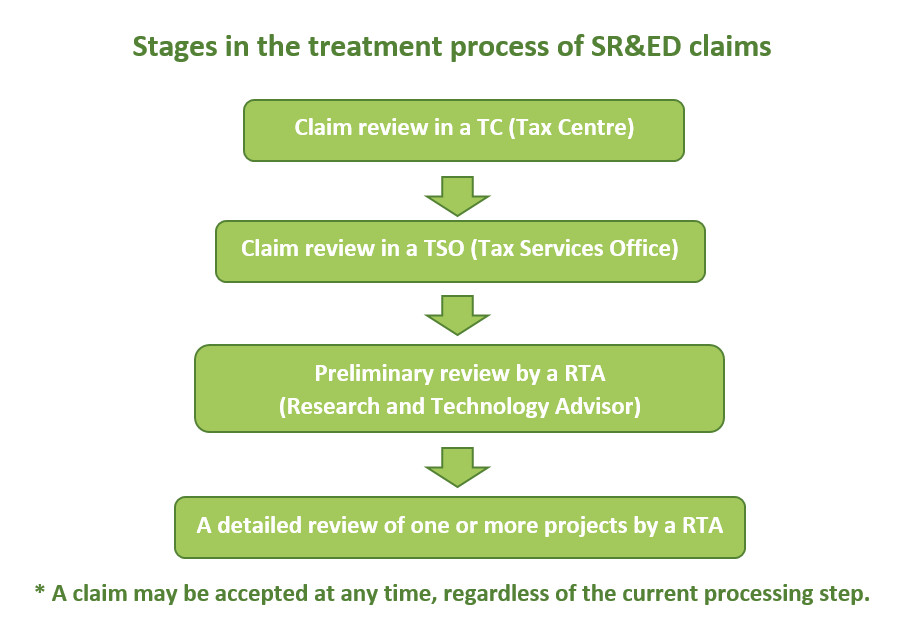 In light of all this information, it is difficult to conceive that two claims could be considered as similar given the large amount of assessment criteria evaluated during the treatment process. Following a rejection, a company would benefit from questioning the RTA about its concerns rather than to refer to claims that it considers (often wrongly) as being comparable. Moreover, the best way to get a positive decision is to provide a claim supported by information that is both relevant and contemporary. Some Self-Assessment and Learning Tools (SALT) are also available on the Canada Revenue Agency web site.
You have questions?